Today we have your lovely liturgy resources plus reflections on the Prodigal Son parable that we all know so well … or do we? I find all is not as thought. 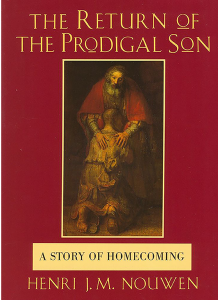 And while we’re on that passage, here’s a fabulous book that you might like – perfect for Lent reading. The Return of the Prodigal Son by Henri Nouwen.

A chance encounter with a reproduction of Rembrandt’s The Return of the Prodigal Son catapulted Henri Nouwen on a long spiritual adventure. Here he shares the deeply personal and resonant meditation that led him to discover the place within which God has chosen to dwell. He probes the several movements of the parable: the younger son’s return, the father’s restoration of sonship, the elder son’s vengefulness, and the father’s compassion.

Blessed is the one whose transgressions are forgiven, whose sins are covered.
When I kept silent, my bones wasted with groaning.

For day and night your hand was heavy upon me;
When I kept silent, my bones wasted with groaning.

My strength was sapped as in the summer heat.
When I kept silent, my bones wasted with groaning.

Then I acknowledged my sin to you. I did not cover up my iniquity.
When I kept silent, my bones wasted with groaning.

Know the peace of God’s forgiveness.
Know yourself forgiven.

If anyone is in Christ, they are a new creation;
the old has gone, behold, all is new.
May God, who reconciled you to himself through Christ,
bless you and strengthen you in the week to come,
as you live in and with and through him.

Go, as ambassadors for Christ
to bless and be blessed.

In the name of Christ. Amen.

I noticed something today.

I’m sure you’ve had the same experience: You’ve done that thing a thousand times before, driven that same route every day, been to that same shop so often they know your name, and only now do you notice it. ‘Is that new?’ you ask. ‘No,’ comes the reply. ‘It’s always been there.’

You feel a fool. It’s so obvious. How could you have missed it?

It happened to me a few months ago when my old floral Dr Martens finally parted sole from body. (Ha ha, sole, geddit?) As befits a Gen-X mum, I asked on facebook for the nearest shoe-repair place, thinking it would be the chain in town.

Nope. Apparently, there was a local shoe-repair guy. On a road that I drive down every day on the school run. And he has a sign outside. A big, white sign that you really can’t miss.
And I’d missed it. Several hundred times over the years.

I must have seen it. I really must. How did I not notice? (He did an ace job on the dockers by the way.)

So what face-slappingly obvious thing in the Bible did I only spot today?

I spotted the ‘now’.

There it is, nestled at the start of verse 25. It’s one of those filler words that we use to punctuate speech and let people know we’re still talking. Jesus had finished the first part of his story and wanted his hearers to know that he hadn’t finished. In fact, he’d only just started.

Because the story (you might want to sit down for this) isn’t about the younger son.

We often finish our tellings at verse 24, when the younger son comes home and is welcomed by his loving father. And that’s not wrong. It’s a powerful and important story. But it’s not the story that Jesus was telling. It was merely the backdrop, the set-up. The real story came after the ‘now’.

Jesus was talking to the religious ‘in’ crowd, the nice folks, the devout, the church-goes and tithe-payers, the people with well-thumbed Bibles and magnetic crosses on their cars. They were the dutiful older son who stayed home and worked diligently on the farm, and the story was about them. They were miffed that Jesus was eating with ‘sinners’, just like the older son was miffed that his father loved and forgave the younger.

It’s getting towards Easter, and soon we’ll be hearing that wonderful passage about the repentant thief on the cross next to Jesus. I wonder if perhaps some of disciples heard that conversation and were a bit miffed. “I’ve followed him dutifully for three years. I gave up my business for him, and now this smelly thief gets to paradise before me! Huh. So much for fair play!”

But that’s kind of the point, isn’t it? It’s not fair. And thank God it isn’t.

God is far more generous than is fair. Far more kind than is sensible. Far more merciful than is reasonable. And I’ve lived in this mercy for years. And I’ve only just noticed.

All the tax collectors and sinners were approaching to listen to Him. And the Pharisees and scribes were complaining, “This man welcomes sinners and eats with them!”

So He told them this parable: …

“But the father told his slaves, ‘Quick! Bring out the best robe and put it on him; put a ring on his finger and sandals on his feet. Then bring the fattened calf and slaughter it, and let’s celebrate with a feast, because this son of mine was dead and is alive again; he was lost and is found!’ So they began to celebrate.

“Now his older son was in the field; as he came near the house, he heard music and dancing. So he summoned one of the servants and asked what these things meant. ‘Your brother is here,’ he told him, ‘and your father has slaughtered the fattened calf because he has him back safe and sound.’

“Then he became angry and didn’t want to go in. So his father came out and pleaded with him. But he replied to his father, ‘Look, I have been slaving many years for you, and I have never disobeyed your orders, yet you never gave me a young goat so I could celebrate with my friends. But when this son of yours came, who has devoured your assets with prostitutes, you slaughtered the fattened calf for him.’

“‘Son,’ he said to him, ‘you are always with me, and everything I have is yours. But we had to celebrate and rejoice, because this brother of yours was dead and is alive again; he was lost and is found.’”

Note that this website contains affiliate links. Anything you purchase by following a link makes (very) small donation to support this ministry. No personal data is passed in either direction and the price you pay is the same.