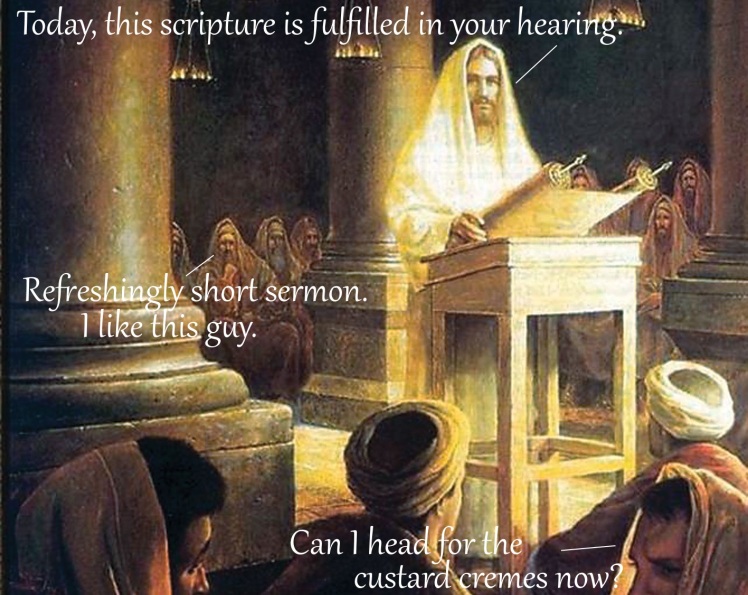 It all started so well, and then Jesus has to go and spoil it. But what was it he did that was so offensive to the good Jewish men of the synagogue?

Jesus quoted some of the miracles of Elijah and Elisha. Great prophets, Good, kosher Jewish guys, if I can use that expression. So what’s the problem? Foreigners, that’s what. Outsiders. People not like us. Elijah and Elisha took God’s kingdom outside of Israel, and Jesus had he cheek to point it out.

Now, I don’t know why all the rabbis and teachers hadn’t spotted it themselves. They’d read the stories often enough, but somehow they managed to ignore that the old woman was from Sidon, and the businessman from Syria. We skate over those facts like they don’t matter, but they mattered big time for Jesus’ hearers.

“God is our God. The God of Abraham, Isaac and Jacob. They worship idols, we can’t have them worshipping our God. They’d never do it right.” You see, it is easy to dress it up in devout humbug. “We’re doing it for God, keeping the faith pure.” Really? Like God needs protecting?

“We can’t go diluting the faith, mixing it with idolatry. So we need to keep ourselves separate. God said so.” True, but he said to be different from the other peoples, not the build a huge wall so that no one can get in or out. In science terms, it’s supposed to be a semi-permeable membrane. Something that distinguishes the inside from the outside, but lets stuff through. Think of it like a sieve.

The kingdom of God has a semi-permeable border. There is a difference between being inside and being outside, but it is not a wall. It never was a wall. It’s not that God was the God of the Israelites in the Old Testament, and that expanded to include Gentiles in the New Testament – it always was everyone. But not everyone realised that.

The whole of the Bible is littered with outsiders being allowed in. Even several of Jesus’ ancestors were not Jewish – Ruth, Rahab and Bathsheba were all foreigners. So how come it was such big news when Jesus said it?

The same reason that it was big news when Peter saw his vision of a sheet in Acts. Jesus for the Gentiles? Oh no, I don’t think so. And big news when William and Catherine Booth left the conventional church and took God to the backstreets and slums. Do we really want people like that in the church? And big news when perhaps this Sunday, that guy who hangs around the back of the pub dealing in stolen goods turns up at church. Or the homeless woman. Or the old man who mumbles to himself and spits. Or the girl with tattoos and slashed arms and syringe marks.

Would you sit next to them?

Think about the area around your church, the people who live or work there. Now look round at the people in your church. Are they the same people? If not, why not?

In the beginning, God made the world (show jar) and it was good.

He made people because he loved them, and they were good (add one colour of rice to jar).

But then it all went wrong. The people did not love God and they did not love each other. A nastiness call sin was born (add pasta to jar).

And the more that people sinned, the less they loved God and loved each other (add more pasta).

And the less they loved God and loved each other, the more they sinned (add more pasta).

Until, eventually, you could hardly tell that it had ever been good (jar is mostly pasta).

So God decided he need to do something to separate the people, whom he still loved, from the sin, which he hated so much he could not have it near him (gently shake jar so that pasta and rice separate into layers).

In times of trial, when things went badly, the people remembered God and tried to give up their sin (show layers).

But the sin stuck to them and they could not shake it off (shake rice back in), perhaps they had forgotten what good looked like.

They were to be different from the other people, to show how they were meant to be, the way God made them – to love and be loved, by God and by each other.

They were not perfect, of course, (add a little pasta to the bag), but you could still see the good that God had made.

But people got a bit confused and thought that being God’s special people was just for them (fix paper over neck of jar with band).

They wanted to be different (fix bag over neck of jar with band) and show the way that God meant things to be (shake jar) but they did that by keeping everybody else out (rice and pasta all stay where they were).

But that is not what God wanted (take bag and paper off).

God never said to exclude people from his kingdom, he only wanted to exclude sin (fix net over neck of jar with band).

He is very happy to have anyone in his kingdom, even those who are mixed up with sin (fix bag over neck of jar with band).

In fact, coming into God’s kingdom separates the sin (shake jar) from the people. And that means that they can be with God, always loved by him and now loving in return (rice will pass to bag, but not pasta).

God’s kingdom always has been open to anyone who will pass from one kingdom to another, leaving behind the sin and making a new people. We’re a mixed bag, and we’re not perfect, but we’re in God’s kingdom, and that is a good place to be (show bag of mixed rice and a little pasta).

If you have realised that you are outside God’s kingdom, and you want to be inside, here is a prayer you could pray:

I know that I have done many things wrong and I know that I cannot earn my way to heaven just by trying to be good.
I want to be in your kingdom and to live with good, not with sin. Please forgive all the wrong and bad in my life and make me one of your children.
Today, I step across the border into a new life with you as my lord and saviour.

If you have prayed that prayer and really meant it, then please tell someone – a trusted friend who prays, your local minister, or me – I’d be delighted to give you an e-hug and pray with you. Welcome to the family, dear brother or sister.

He began to tell them, “Today, this Scripture has been fulfilled in your hearing.”

All testified about him, and wondered at the gracious words which proceeded out of his mouth, and they said, “Isn’t this Joseph’s son?” He said to them, “Doubtless you will tell me this parable, ‘Physician, heal yourself! Whatever we have heard done at Capernaum, do also here in your hometown.’” He said, “Most certainly I tell you, no prophet is acceptable in his hometown. But truly I tell you, there were many widows in Israel in the days of Elijah, when the sky was shut up three years and six months, when a great famine came over all the land. Elijah was sent to none of them, except to Zarephath, in the land of Sidon, to a woman who was a widow. There were many lepers in Israel in the time of Elisha the prophet, yet not one of them was cleansed, except Naaman, the Syrian.”

They were all filled with wrath in the synagogue, as they heard these things. They rose up, threw him out of the city, and led him to the brow of the hill that their city was built on, that they might throw him off the cliff. But he, passing through the middle of them, went his way.