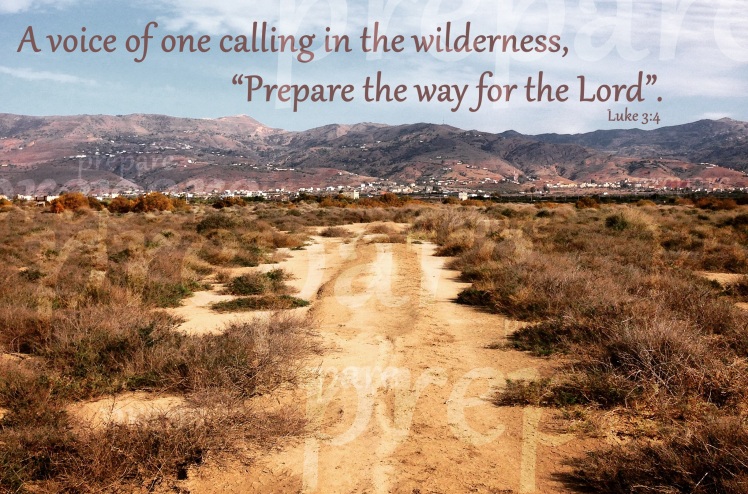 Whoa, we’ve got a lot of names here. Before we get into our text, let’s sort this all out. Here’s a potted who’s who and what’s what:

But why does any of his matter? Well Luke, who wrote this account, was a doctor by profession, and was very keen to establish solid facts, as any good scientist would. Next, there was no firmly established dating system in place then – they didn’t use AD and BC until many years later. Mostly people went by ‘the something year of the reign of …’ well pick a leader. That’s why there are so many here. Thirdly, Luke was probably not Jewish, and he was writing for non-Jewish people who might not know the story, so he wanted to make sure they had all the background.

What this all makes very clear is that this is a real time, in real history, with real people. It’s not a made up myth or a good story with a helpful moral. This is fact.

So, having established where and when – who? Who is this guy? One who comes out of the desert, preparing the way of the Lord! One who brings people through water to a new life. Jesus said he was like Elijah, but he was also like Moses, or like Joshua.

Joshua brought the people of Israel through the Jordan to the Promised Land, but they never quite managed to live up to their side of the promise. Moses brought their fathers through the Red Sea out of slavery and into freedom – except that it took forty years of mumbling and grumbling before the Israelites could shake the sand of Egypt out of their heads.

We can be the same as them. God, in his goodness, has rescued us from the slavery of sin and put us in a good land, flowing with milk and honey (and baby wipes ‘cos that sounds kind of messy). And what do we do? We continually fall back into our old ways, repeating the same old sins, falling for the same old temptations – failing to live up to our side of the promise.

Back then, as now, when the Emperor went anywhere, there would be a work party going ahead of him, repairing roads, tidying everything up and making sure that all was as it should be. That’s what the quote from Isaiah is talking about, except that it was someone far more important than Tiberius Caesar on his way.

John was sent to ‘prepare the way of the Lord’. He was the PR Events Manager who went ahead of the VIP, making sure everything, everyone, was ready for his coming. We need to make sure we’re ready too. Advent is the perfect time for a spiritual spring-clean. After all, if the Queen were coming round for tea, you’d make sure the loo was sparkling and there were some good biscuits in, wouldn’t you?

Sherlock Holmes would go next to Pure Fiction, as would Batman. At the Pure Fact end, you could put the person sitting next to you, or anyone else who is definitely real.

What about characters like Santa Clause? Before you consign him to the Pure Fiction end, remember that his name is derived from St Nicolas, a 4th century Bishop from Turkey, who had a reputation for secret gift-giving. So while the jolly chap with a penchant for chimneys may be fiction, there is a basis in fact. Add him to your line.

It’s the same with Robin Hood and King Arthur. The popular films are almost entirely make-believe, but there are historical people underneath all the flim-flam. Where would you put these people on your scale?

Now think about the people in our reading; Pilate, various Herods, Zechariah, John, and the one he points to, Jesus. Where do they come on your scale? Please don’t feel you need to put everything at the ‘Pure Fact’ end. Some parts of the Bible are clearly made-up stories – Jesus told many stories and they are fiction.

You do not need to give the ‘right’ answer, the expected, whatever you think that might be. Try to look honestly about how much you see the narratives of the Bible as reflecting actual facts, opinions, embroidered memories, stories or myth.

Wherever you put those people on your line, it’s ok. God won’t be offended if you are not too sure if the feeding of the 5000 really happened. God would much prefer that you are honest and real than pretend you believe something you don’t.

In the fifteenth year of the reign of Tiberius Caesar – when Pontius Pilate was governor of Judea, Herod tetrarch of Galilee, his brother Philip tetrarch of Iturea and Traconitis, and Lysanias tetrarch of Abilene – during the high-priesthood of Annas and Caiaphas, the word of God came to John son of Zechariah in the wilderness. He went into all the country around the Jordan, preaching a baptism of repentance for the forgiveness of sins. As it is written in the book of the words of Isaiah the prophet:

‘A voice of one calling in the wilderness,
“Prepare the way for the Lord,
make straight paths for him.
Every valley shall be filled in,
every mountain and hill made low.
The crooked roads shall become straight,
the rough ways smooth.
And all people will see God’s salvation.” ’