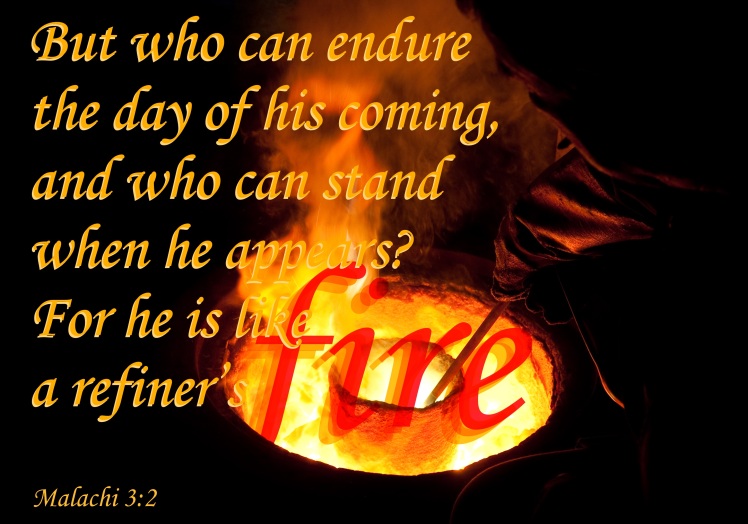 This is one of the passages used in Handel’s ‘Messiah’; probably the most famous piece of Christmas music. More famous, perhaps, than even those shopping mall classics by Band Aid and Slade. My apologies if you now have ‘Do they know it’s Christmas?’ stuck in your head.

It’s a bit of a weird reading though, when you come to look at it. It starts off OK – ‘the messenger sent ahead to prepare’ – yep, John the Baptist, we’re happy with that. Next – ‘the Lord will come to his temple’ – sure, that sounds all very good. But then it gets weird – ‘who can endure it? Who can stand it?’ – Eh? Surely the Lord coming would be a good thing; and we would be happy about that, wouldn’t we?

Look at the description in the second half. Actually, that’s a bit weird too. Refiner’s fire and fuller’s soap? How is fire like soap, and what’s a fuller when he’s at home? (That’s Northern for ‘whoever he is’.) Stand back, here comes the science bit!

Most metals are not pure, they have bits of other metals in plus gunk and glop (those are technical terms). The best way to get rid of the impurities is to heat up the metal until it melts. The gunk and glop will either burn off or float to the top, and then you can scrape off the layer of scum, leaving only the pure metal underneath. That’s what refining is all about. It doesn’t mean being all refined and having a nice cup of tea with your little finger held out. It’s really a pretty ferocious process – especially if you happen to be the metal that is being refined. Good word though, that. Re-fine-ed. Made fine again.

What about fulling? We don’t have fullers these days, though you might perhaps have heard of Fuller’s Earth, sometimes used for cat litter. Fullers were the people who turned sheep’s wool into felted cloth, and it was not a nice process! First you remove the grease using Fuller’s Earth and soap – but we’re talking more heavy-duty drain cleaner than perfumed moisturising balm. Next you bleach it by stomping on it in a vat of yesterday’s wee-wee. Yup, you heard right. Finally you thrash it to within a cubit of its life, until it all mats together and forms felt. Then you wash out the wee.

And that’s what the Lord has come to do. To us. “But who can endure the day of his coming, and who can stand when he appears?” Makes a lot more sense now. When God says he wants to wash us with soap this is not just a nice little tidy up, a quick wash and brush up; this is big, radical, painful, inconvenient, life-changing stuff. Metal that has been refined is not the same as metal that has not. Wool that has been fulled is very different from the stuff that came off a sheep.

King David talked about this in Psalm 51. Do you recall the story? – any tabloid would be pleased to break this – King commits adultery, gets someone else’s wife pregnant and then has the husband murdered!

It really is pretty bad. And this is supposed to be ‘a man after God’s own heart’. Some major heart surgery is urgently needed. David repents and records it in Psalm 51: “Have mercy on me, O God … blot out my transgressions … Wash away all my iniquity, and cleanse me from my sin … wash me, and I will be whiter than snow.”

What David was asking for was not ‘Please God, dab a little smudge off my cheek with a wet-wipe’. This is more like ’bleach me and scrub me and wring me out until I am unrecognisable’. David knew he needed to be changed, even though it was not a pleasant process. You can read the whole story in 2 Samuel 11 and following.

Refining metal is hot, dirty and dangerous; but it makes something precious out of scrap. Fulling was filthy, smelly and harsh; but it turned something useless into something useful. I’d like to be useful treasure, not useless scrap, but there’s still plenty of gunk and glop that need burning off before I can be an offering pleasing to the Lord.

Fortunately, God has a lot of cat litter.

We are going to do some fulling, (but on a smaller scale and without the wee). You will need a tray or a towel, because there will be drips; hot water, soap, wool scraps (it must be pure wool) and a large needle.

Make small ball by winding some wool around your fingers. Then tease out some other scraps into fibres and wind them around the ball until it is a good round shape. Dip the ball in the hot water and squeeze it out. Rub some soap into the wool and make sure it is thoroughly covered. keep squishing it and rolling it around in your hands, dipping it in the hot water and rubbing soap into the ball.

After a while the wool will start to shrink and harden and turn into felt. Thread the large needle with a length of wool and knot one end.  Thread the yarn through your felt ball, hiding the knot inside. When it is dry, you can use it as a book mark to remind you of the passage.

Thank you that, through Jesus, you see me dressed in clean robes of righteousness,
not in my own filthy rags.
I know that I will never be good enough to earn my way to heaven,
but still I want to live a life that pleases you,
and I know I fall way short.
Please help me and change me and wash me and refine me,
so that I can be more the way I ought to be.

See, I am sending my messenger to prepare the way before me, and the Lord whom you seek will suddenly come to his temple. The messenger of the covenant in whom you delight—indeed, he is coming, says the Lord of hosts. But who can endure the day of his coming, and who can stand when he appears?

For he is like a refiner’s fire and like fullers’ soap; he will sit as a refiner and purifier of silver, and he will purify the descendants of Levi and refine them like gold and silver, until they present offerings to the Lord in righteousness. Then the offering of Judah and Jerusalem will be pleasing to the Lord as in the days of old and as in former years.

New Revised Standard Version Bible: Anglicised Edition, copyright © 1989, 1995 the Division of Christian Education of the National Council of the Churches of Christ in the United States of America. Used by permission. All rights reserved.