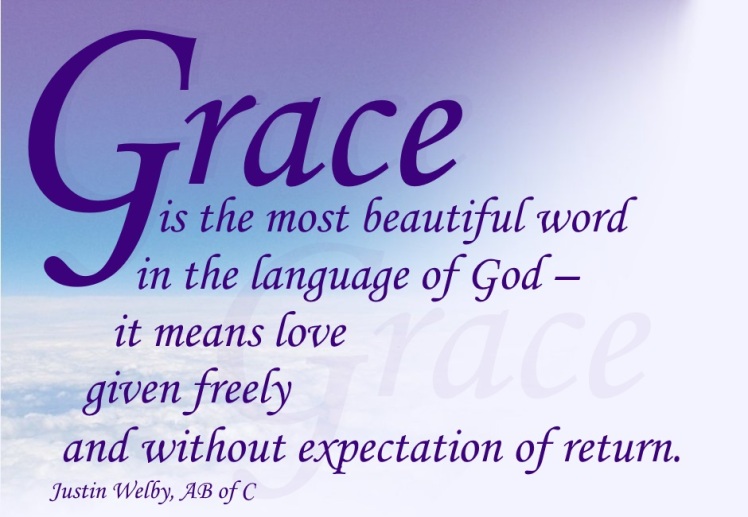 Find some volunteers who are ticklish. Ask them to try to not laugh, then tickle them.

Sometimes, no matter how hard we try, we just can’t help ourselves. That is where grace come in.

New Year’s Resolutions. Yes it’s that time of year again. Get fit, learn Spanish, tidy out the shed – all good intentions but so often after a week or a month they end up looking as wrinkly and unappetising as the left-over sprouts.

Why is it that we find it so hard to keep to our resolutions? I think there might be a clue in verse 17 of our reading. It’s a very famous passage, full of lovely quote-worthy sound bites, but verse 17 tends to be skated over a little. Here it is: “For the law was given through Moses; grace and truth came through Jesus Christ.”

We hear that Grace and Truth thing a little earlier too, “… the glory of the one and only Son, who came from the Father, full of grace and truth.” So on the one hand we have law and on the other grace and truth.

But what is this word, grace? We bandy it around in church but don’t use it much in the real world other than to mean someone who does well on Strictly Come Dancing (Dancing with the Stars in US). Grace has a meaning so much bigger than having nice floaty arms. Justin Welby, the Archbishop of Canterbury said, “Grace is the most beautiful word in the language of God – it means love given freely and without expectation of return.”

I rather like that definition. It fits in well at Christmas. A gift given, with no expectation that another gift will be given back.

I well remember my eldest child’s first Christmas. She was about six months old and was utterly mesmerised by the twinkly lights and sparkly wrapping paper. I gave her gifts with no expectation of return other than the delight of watching her receive. True to expectation, her favourite gift was the sparkly wrapping paper, but that’s just fine. I gave because I wanted to give. And that, in some small part, is a reflection of God’s character.

Grace is God’s love given with no expectation of return. Just because he’s nice like that.

So how does this all fit in with New Year’s resolutions? It’s all to do with law and grace.

The law was meant to show us what God is like. It was supposed to help us understand how holy and awesome he is, so that we would see our need, and ask for his help and forgiveness. Instead, it got turned into a tick-list. ‘If I do this and this and this, then I can be good enough to get to heaven’. But no-one can be saved by obeying the law. We can’t make the world – or even just our lives – perfect by New Year’s resolutions. The whole point of the law is that no-one is good enough.

No-one except Jesus, who came from the Father, full of grace and truth. And it’s that grace that is the answer to the problem of law. Law shows us what is wrong. Grace puts it right.

So this New Year, while it is good to exercise more and tidy out the shed, let’s not get taken in by the old lie that trying harder or working longer or doing more is the way to glory, either in this world or the next. The glory of the gospel is that all that ever had to be done, has already been done. For us. Not by us. God’s grace is a gift. We only need to accept.

Generous Loving Father,
Full of grace and truth
teach me to be a child at your feet –
not deserving your blessing, but blessed anyway,
not worthy of your love, but loved anyway,
not fit for your family, but adopted anyway.

For these and for all your mercies, we praise you.

There was a man sent from God whose name was John. He came as a witness to testify concerning that light, so that through him all might believe. He himself was not the light; he came only as a witness to the light. The true light that gives light to everyone was coming into the world.]

He was in the world, and though the world was made through him, the world did not recognize him. He came to that which was his own, but his own did not receive him. Yet to all who did receive him, to those who believed in his name, he gave the right to become children of God — children born not of natural descent, nor of human decision or a husband’s will, but born of God.

The Word became flesh and made his dwelling among us. We have seen his glory, the glory of the one and only Son, who came from the Father, full of grace and truth.

(John testified concerning him. He cried out, saying, “This is the one I spoke about when I said, ‘He who comes after me has surpassed me because he was before me.’”) Out of his fullness we have all received grace in place of grace already given. For the law was given through Moses; grace and truth came through Jesus Christ. No one has ever seen God, but the one and only Son, who is himself God and is in closest relationship with the Father, has made him known.