This activity makes for some interesting mathematical fun as well as a a great take-home reminder of the mystery of the Trinity. The fact that I can’t quite get my head round it does not mean that it is not so. Works with maths. Works with God too.

We’re going to make some joined-but-not-joined loops. They’re called Borromean (borrow – ME – an) rings and they’re a popular mathematical curiosity. I have friends who have wedding rings like this.

A fun opener is to flash this picture up briefly and say you’ll give a huge prize for anyone who can identify which ring is on the top.

The answer? They all are. And none are. It’s a bit of a mystery. How can yellow be at the top and at the bottom? It doesn’t make sense. Nevertheless, it is so.

It’s a bit like that with the Trinity. How can God be three and one? It doesn’t make sense. Nevertheless, it is so.

To make your own set of Borromean rings, you will need some sticky tape and three strips of paper. These need to be five to ten times as long as they are wide. I’ve used the width of A4 x 2cm. Alternatively three plastic ties or three glow sticks with joiners. Glow sticks or narrower strips of paper (1cm) make a wearable child’s bracelet.

If you want, you can write the qualities or roles of the three persons of the trinity on the strips of paper. Join two strips to make loops and place one inside the other. The first picture shows the orange loop inside the blue loop. Do not link the loops. 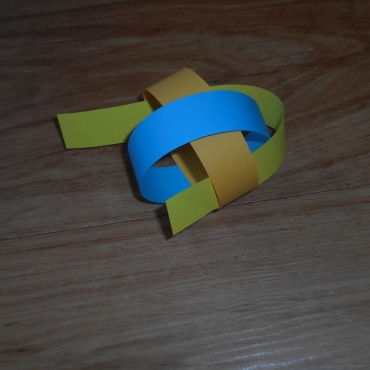 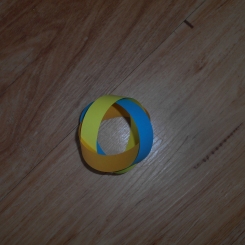 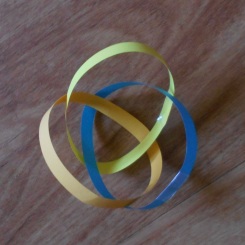 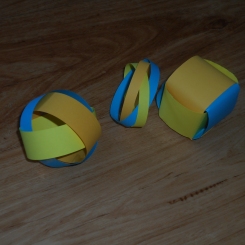 You now have three loops all joined together although, strangely, no one loop is joined to any other. Don’t believe me? Try breaking one of the rings. The other two come apart. They are not joined.

If you use thinner strips, the rings can be opened out into the familiar trinity symbol, or you can flatten them together to make a bracelet. Wider loops make a ball or a cube. 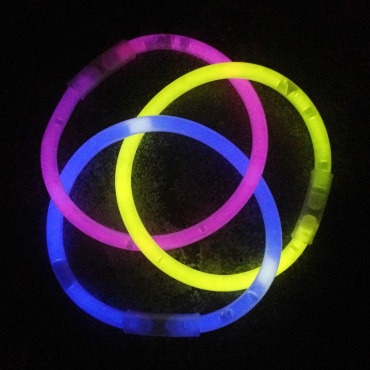 The glowstick pictures for this post are not mine, they belong to a fascinating mathematics blog called Coffee Cup Cardioid.

Or the readings for Trinity Sunday: years A, B and C