Different people have different reations to the resurrection of Jesus – ranging from “Wow!” through “Yeah, right” to “So what?” and everything inbetween. It was the same in Jesus’ day. Some people believed immediately, some took more convincing. Some saw the miracles, ate the bread and went back to their day jobs, some people were changed for ever.

Recently I spent some time at Oxford’s Ashmolean Museum and this image caught my eye. I love all the different reactions of the people around Jesus. Have a look at them.

In the top left are two women walking towards the tomb, about to get the shock of their lives. Near their feet, just below Jesus, are two soldiers covering their eyes. On the left is a guy running away, though looking back. At the bottom there’s someone asleep, and above him on the right is someone nonchalantly watching the whole commotion.

I wonder which reaction is mine?

The two women have not heard the news yet. They don’t know what Easter is all about, but they are looking, and they will soon find out.

The soldiers covering their eyes are aware that some amazing is taking place, but they are choosing not to look. They don’t want to know.

I imagine that the guy running away has seen Jesus and gets what’s happened. He’s fascinated and can’t help looking back, but he’s also frightened of the commitment he’d have to make if he stayed, so he runs away. I wonder if he’ll comeback sometime.

The person asleep at the bottom of the picture has no idea that anything is happening at all. He will miss the whole thing unless someone wakes him up. I wonder how many people effectively sleep through their whole lives, just doing the daily that and that, and totally missing the why.

The man on the right is the strangest one to my mind. He’s the only one actually watching what’s happening, but he does not seem to be reacting. He can see this fantastic miracle, yet he’s casually leaning on his elbow, half wrapped in his cloak, like he might at any moment yawn and stretch and say, “Yeah, but so what?”, then turn over and go back to sleep.

How do we, how do I, react to the news of Jesus’ resurection? For many folks it’s plain unbelieveable – and I get that. I’m a scientist and we work on evidence and statistical probability. And you gotta admit, a random carpenter from Galillee coming back to life after being killed is pretty improbable.

However, that is not the same as impossible. Usually, the most likely explanation is right, but just occasionally, the one-in-a-million happens (about one time in a million, in fact). 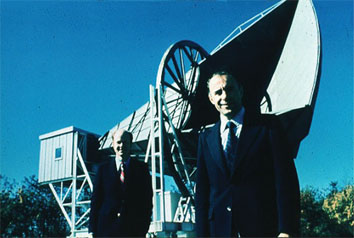 In 1965, two researchers were using a large antenna to listen to the almost silent radio signals from space. But when they were setting it up, they heard a fuzzy ‘noise’ coming from everywhere, like the crackle of a badly-tuned radio. Most likely explanation? Local interference from nearby New York. Or stray military signals. Or radiation from the Milky Way. Or Pulsars or something. Perhaps even the accumulated poo from pigeons nesting in the dish. Unlikely explanation? That this was the noise still echoing from the Big Bang, 13.7 billion years ago.

Except it was. An they got the Nobel Prize for finding it.

Weird things that you’d never believe happen all the time. Like deep sea fish with lamps on their heads, or light being both a partical and a wave (that’s seriously weird). Being unbeliveable, being improbable, is not the same as being false.

The evidence for Jesus’ resurrection is so strong that nobody would question it except for two things: First, it is a very unusual event. And second, if you believe it happened, you have to change the way you live.

What am I going to do with the evidence for Jesus’ resurrection? Will I watch with detached disinterest and do nothing about it? Will I sleep through it and never grapple with The Big Questions? Will I see and understand and run away from the commitment? Will I hide my eyes and refuse to see? Will I seek the truth?

That evening the disciples were meeting behind locked doors, in fear of the Jewish leaders, when suddenly Jesus was standing there among them! After greeting them, he showed them his hands and side. And how wonderful was their joy as they saw their Lord!

He spoke to them again and said, “As the Father has sent me, even so I am sending you.” Then he breathed on them and told them, “Receive the Holy Spirit. If you forgive anyone’s sins, they are forgiven. If you refuse to forgive them, they are unforgiven.”

One of the disciples, Thomas, “The Twin,” was not there at the time with the others. When they kept telling him, “We have seen the Lord,” he replied, “I won’t believe it unless I see the nail wounds in his hands—and put my fingers into them—and place my hand into his side.”

Eight days later the disciples were together again, and this time Thomas was with them. The doors were locked; but suddenly, as before, Jesus was standing among them and greeting them.

Then he said to Thomas, “Put your finger into my hands. Put your hand into my side. Don’t be faithless any longer. Believe!”

“My Lord and my God!” Thomas said.

Then Jesus told him, “You believe because you have seen me. But blessed are those who haven’t seen me and believe anyway.”

Jesus’ disciples saw him do many other miracles besides the ones told about in this book, but these are recorded so that you will believe that he is the Messiah, the Son of God, and that believing in him you will have life.

Wolfhart Pannenberg: I have seen this quote in many places, but always un-referenced. If anyone knows chapter and verse, or even just book, I’d be most grateful to know.