UPDATED SCRIPT!
This version has more words and makes a great activity for youth groups / cafe church or similar settings. You will need six sticky notes, somewhere to stick them (such as a table, book or the back of the pew/chair in front of you) and a pen.

On one sticky note, write SO in large letters. On the next, write ME, and on the third write NO. Draw the body of a stick man on the fourth, a smiley face on the fifth and a sad face on the last one.

We can use the sticky notes as the head above the body to illustrate this script (sticky notes indicated in bold). Have fun making all the words! 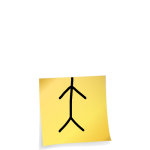 Today we are going to meet someBODY, but not just anyBODY, a very important BODY.

Well, he thought he was, anyway.

He thought he was SO important that all he thought about was ME, ME, ME. He just went ON (upside down NO) and ON and ON about himself all day.

‘I am the best of all MEN’ (overlap ME and upside down NO) he boasted.

‘I have WON the prize for the nicest NOSE. I am the best SON any ONE could ever have, and I will SOON make it SNOW on the MOON!’ 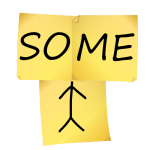 He was SO ME, ME, ME that he thought he was really SO+ME+BODY special. He was clever and rich and he had a nice car and a good job and really, really great hair.

But God looked at Mr SOMEBODY and said ‘Do you think you are important because you are so clever? NO, that does not make you important.’

‘Do you think you are important because you have a nice car? NO, that does not make you important.

‘Do you think you are important because you have really, really great hair? NO, that does not make you important.’ 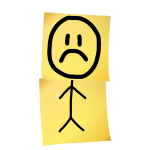 And Mr SOMEBODY was SAD(+BODY) because he realised that all these things did not make him important in God’s eyes. 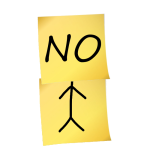 He thought to himself. ‘NO, I am not SO special. I am not better than everybody else. I am just ME. I understand that NOW. Really, I am NO+BODY.’ And he talked to God.

‘Dear God, I am SO sorry. How could you love a NOBODY like ME?’

And God SMILED and said, 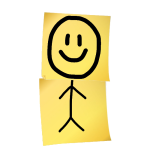 ‘My dear SON, I loved you before you ever knew me. To me, you are SOMEBODY very special because I made you. I even made your NOSE.’

SO NOW he smiled too. (SMILEY+BODY)

Today’s passage features the story of Naaman: General of the Army, rich, famous and favourite of the king. He had a skin disease (many translations say leprosy) and ended up going to Elisha, prophet of God, for help. But Naaman wasn’t Jewish. The Lord wasn’t his God. He didn’t even live in Israel, he lived several days’ journey away. So how did he end up there?

As I said, this is a passage about an important person – someone great in their master’s sight and highly regarded – a brave little girl who was … er … sorry?

Oh, you thought I was talking about General Naaman still?

No, no. He might have been OK in battle, but in matters of faith he had a lot to learn, and that from one of the most overlooked, seemingly insignificant of Bible heroes – a nameless slave girl. I think she deserves a name, so I’ll call her Elia, which means ‘The Lord is God’.

I don’t know about you, but until I looked closely at this passage, I was not even aware that Elia existed. She’s about the most insignificant person you can think of. Let’s have a look at her story:

The king of Aram had sent his army (probably led by Naaman) to raid Israel, and Elia was captured. We do not know what happened to her parents. She ended up in Damascus as a slave for Naaman’s wife. Human trafficking. There is nothing new under the sun.

But in Damascus Elia does not forget the God she has worshipped, nor the prophet of God, Elisha. And at the right time, Elia speaks up. But who would listen to a slave? Who cares what a foreigner has to say? Who pays attention to a child – and a girl at that? In terms of social status we really are in the gritty bits at the bottom of the bathtub.

Yet this nobody, this non-person, this child labourer, migrant worker, orphaned immigrant – this girl, known and loved by God, is powerfully used by the Lord she affirms.

Elia’s role is small. She is not a great preacher or author. She does not work miracles or stand in front of crowds. She simply speaks what she knows: the God of her homeland can fix this.

The message reaches high places. Elia tells her mistress, who tells Naaman, who tells the king. Then Naaman, loaded with a letter to the king of Israel and a small fortune in gifts, sets out to find the prophet of the Most High God.

But notice where he looks. Just as the magi who searched for the ‘one born king of the Jews’ thought they would find him in Herod’s palace, so Naaman looks for the prophet of the Most High God in the palace of the king of Israel (who then has a bit of a melt-down). It makes sense. Would not the prophet of God be with the most important people? And Naaman is an important foreign dignitary. Should he not have all the honour that status accords? The finest food, the best room with toilet paper folded in a little triangle at the end, a chauffeur-driven camel, and those posh choccies in the gold wrapping?

But no. A servant arrives at the palace to tell Naaman to go to Elisha’s house. A servant, you notice – Elisha doesn’t bother to go himself. Even when Naaman arrives in splendid procession right outside the door of Elisha’s less-than palatial house, Elisha doesn’t get off his bum to see him personally. He just sends another messenger with a really humiliating cure.

Naaman is furious. ‘Seriously? That’s all? Go jump in a river, he said? Take a long walk off a short pier? How dare he speak to me like that!’ Naaman had been expecting much better than this. Is this how to treat a VIP?

But Naaman has to learn that his importance in worldly affairs does not matter one single jot when it comes to God. The ‘cure’ was nothing to do with the water. It was all to do with humility. And it worked. Both ways.

Just after our passage we read of Naaman’s declaration that ‘there is no God in the whole world except in Israel’ and his rather touching request that he be allowed to take two baskets of Israel’s earth back home with him, so that he could worship the God of Israel in his homeland.

So we have two people in this story: Elia, the nobody who was the somebody God used in that place. And Naaman, the somebody who found he was nobody to deserve special treatment, but received God’s mercy and grace anyway.

Who am I in the eyes of the world? A somebody? A nobody?

But God demonstrates his own love for us in this: While we were still sinners, Christ died for us. (Rom. 5:8)

May we have the courage of the slave girl
to speak out
and witness to your saving power.

May we have the humility of Naaman
to be obedient
and worship you in our daily lives.

Naaman, commander of the army for the king of Aram, was a great man in his master’s sight and highly regarded because through him, the Lord had given victory to Aram. The man was a brave warrior, but he had a skin disease.

Aram had gone on raids and brought back from the land of Israel a young girl who served Naaman’s wife. She said to her mistress, “If only my master would go to the prophet who is in Samaria, he would cure him of his skin disease.”

[So Naaman went and told his master what the girl from the land of Israel had said. Therefore, the king of Aram said, “Go and I will send a letter with you to the king of Israel.”

So he went and took with him 750 pounds of silver, 150 pounds of gold, and 10 changes of clothes. He brought the letter to the king of Israel, and it read:

When this letter comes to you, note that I have sent you my servant Naaman for you to cure him of his skin disease.]

When the king of Israel read the letter, he tore his clothes and asked, “Am I God, killing and giving life that this man expects me to cure a man of his skin disease? Think it over and you will see that he is only picking a fight with me.”

When Elisha the man of God heard that the king of Israel tore his clothes, he sent a message to the king, “Why have you torn your clothes? Have him come to me, and he will know there is a prophet in Israel.” So Naaman came with his horses and chariots and stood at the door of Elisha’s house.

Then Elisha sent him a messenger, who said, “Go wash seven times in the Jordan and your flesh will be restored and you will be clean.”

But Naaman got angry and left, saying, “I was telling myself: He will surely come out, stand and call on the name of Yahweh his God, and will wave his hand over the spot and cure the skin disease. Aren’t Abana and Pharpar, the rivers of Damascus, better than all the waters of Israel? Could I not wash in them and be clean?” So he turned and left in a rage.

Then Naaman and his whole company went back to the man of God, stood before him, and declared, “I know there’s no God in the whole world except in Israel.”