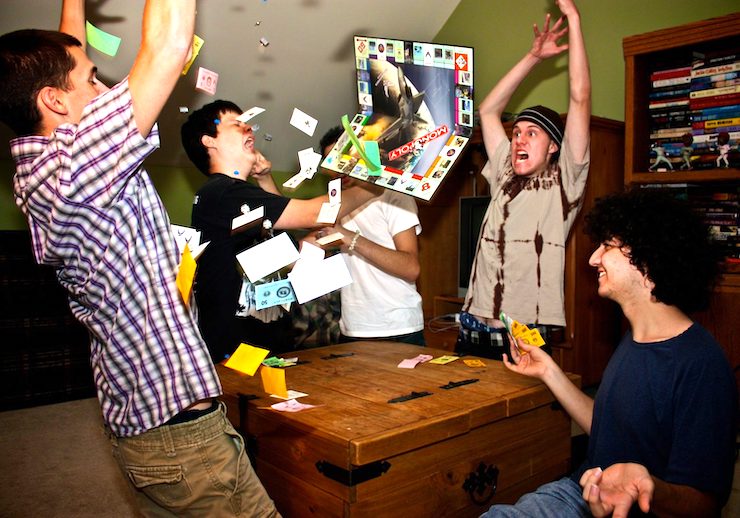 Many of us have experienced the terrifying wrath of a four-year-old who can’t cope with losing at snakes and ladders. Some of us will have been that four-year-old, but hopefully most of us grow up and learn to accept that, in every game of winners and losers, we will more often be the loser.

(Note, this does not apply to playing Monopoly with your rellies at Christmas.)

I’m not being pessimistic or depressing when I say that we mostly lose. That’s just how the maths works. Six kids running in the school sports day = 1 winner and 5 losers.

Brief aside:  Some avoid this ‘problem’ by declaring everyone a winner, but that kinda defeats the object of having a race and is unfair on the kids who excel at running (not me). If we rank kids on how well they read, write, add up, etc, (and kids know they are ranked like this) for goodness’ sake, let sporty kids shine as well. Also, how will kids ever learn to be good losers if they never lose? <end rant>

Given that we spend a lot of our lives not coming first, not being the best, not winning the prize, we learn to be good losers and accept defeat with poise. But do we ever teach ourselves to be good winners too?

My children used to watch a quiz show in which eliminated contestants had to walk across the studio while the rest placed L-shaped fingers on their foreheads and chanted, ‘Loser! Loser!’ I really hated that part because it taught children to be sore winners instead accepting their good fortune with grace.

So how can we have a godly attitude when we win (occasionally) and when we lose (mostly)?

The book of 1 Samuel ends with the death of Saul. Monarchy being the only thing that travels faster than light1, David immediately became king. Finally, he had won. His enemy of many years was dead, the throne was ready for his pert and noble bum, and David could set to work as God had called him.

Surely this, of all moments, was the moment for rejoicing.

But no. The start of 2 Samuel records David’s response to the news of his kingship. He laments. And he not only laments the death of his dear friend, Jonathan, but also of Saul, his enemy!

This is a very different reaction from what we often see on our screens where, as Abba sang, “The winner takes it all / The loser’s standing small”. The hero wins in glory while the thwarted villain is humiliated. The cup final champions celebrate with champagne; the second-placed team slinks home in shame. The early bird catches the worm; the worm … well …

You might have noticed “How the mighty have fallen!” in David’s lament. It’s a phrase we use to mock the pompous politician who is brought down to earth or the self-declared expert who is revealed as a fraud, but this is not how David was using it. He wasn’t crowing over Saul’s defeat, but recalling the heights he had attained. The emphasis is on the ‘mighty’, not the ‘fallen’ (and fallen means fallen in battle here.)

This lament treats Saul and Jonathan like the eliminated couple on Strictly Come Dancing where losers are not mocked or humiliated, but consoled (lots of hugs), honoured (best-bits reel), wept over (watch the mascara!) and given a final dance amid many fond goodbyes. Surely, that’s a better model than my kids’ quiz show?

Jewish folklore recounts a tale in which David’s son, Solomon, asks his wise men to create something that will console him in sadness and humble him in pride.

They brought him a ring engraved with “This, too, shall pass”.

Perhaps David had that ring, too.

After the death of Saul, David returned from defeating the Amalekites and stayed at Ziklag two days.

David sang the following lament for Saul and his son Jonathan, and he ordered that the Judahites be taught The Song of the Bow. It is written in the Book of Jashar:

The splendor of Israel lies slain on your heights.
How the mighty have fallen!

Mountains of Gilboa,
let no dew or rain be on you,
or fields of offerings,
for there the shield of the mighty was defiled—
the shield of Saul, no longer anointed with oil.

Jonathan’s bow never retreated,
Saul’s sword never returned unstained,
from the blood of the slain,
from the bodies of the mighty.

Saul and Jonathan,
loved and delightful,
they were not parted in life or in death.
They were swifter than eagles, stronger than lions.

Daughters of Israel, weep for Saul,
who clothed you in scarlet, with luxurious things,
who decked your garments with gold ornaments.

How the mighty have fallen in the thick of battle!
Jonathan lies slain on your heights.
I grieve for you, Jonathan, my brother.
You were such a friend to me.
Your love for me was more wonderful
than the love of women.

How the mighty have fallen
and the weapons of war have perished!

1: “The only thing known to go faster than ordinary light is monarchy, according to the philosopher Ly Tin Wheedle. He reasoned like this: you can’t have more than one king, and tradition demands that there is no gap between kings, so when a king dies the succession must therefore pass to the heir instantaneously.”