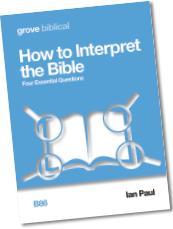 How to Interpret the Bible: Four Essential Questions

Interpretation – isn’t that just a posh word for ‘twisting the Bible to make it say what you want’?

Actually, it’s the opposite. Interpretation is all about trying not to (inadvertently) twist the Bible to fit our fancies and fashions.

Ian Paul’s latest contribution to the shelves of Grove Books gives Biblical, usable advice on how avoid the common errors of interpretation, with well-sourced and soundly-reasoned comments on some of Scripture’s knottier texts.

Do We Need to Interpret the Bible?

Surely we can just read what it says, can’t we? Not, answers Paul, if that means reading ‘When you pass through the waters, I will be with you.’ (Isa 43:2) as “God giving us swimming lessons”!

The danger comes when we think that we are not interpreting, just ‘reading what it says’. In reality, all communication involves “a process of interpretation which can be done well or badly and which is shaped by our own situation, presuppositions and concerns.”

Paul notes that even back in Nehemiah 8 interpretation was needed, as The Book of the Law (the Pentateuch) was re-discovered by the returning exiles.

” ‘[The Levites] read from the Book of the Law of God, making it clear and giving the meaning so that the people understood what was being read.’
“A cultural, historical and possibly linguistic gap has been opened up between the text and the people, and so it needs interpretation.”

In this slim, easy-to-read booklet, Paul poses some insightful reflections, and helps us to recognise the assumptions we bring to a text. He offers four essential questions that we can use to bridge that gap between the word and the world. They consider the passage’s:

The Kind of Text – what does it mean here?

Paul stresses the importance of identifying the genre of the passage, because that gives us the first and biggest clue as to what the passage is about. Some of the trickiest passages of the Bible can be greatly illuminated by considering their genre. Paul demonstrates this using the start and the end of the Bible, each the subject of wildly varying interpretations, from the petrified literal to the floridly metaphoric. Referring to the account of creation, Paul comments:

“In terms of genre, Genesis 1 bears little relation to a science textbook.”

While of Revelation he says:

“John’s very specific references to the situation of his readers … throughout the book, imply that he has a message to help them live in their first-century context rather than offering an ‘end-times timetable’ for the distant future.”

However, Paul insists that proper interpretation is not an excuse for a loose-leaf Bible, casually consigning the passages we don’t like to the ‘symbolic’ bin and nailing others firmly to the ‘literal’ mast.  Symbolic passages must be read symbolically, and literal passages literally.

Its Original Context – what did it mean then?

While the Bible, as God’s word, is written for us, it was not written to us.

Paul gives a pertinent example from St Paul. In 1 Cor 11, the metaphorical meaning of ‘head’ in the 1st century is significantly different from the connotations we give it in the 21st.

“We assume it refers to authority or control, since we use it so often with this sense (as in ‘head teacher’) but that does not appear to be the meaning then. The understanding of physiology in Paul’s day relied in the first instance upon common-sense observation, and when you cut off someone’s head they do not run around out of control, but drop to the floor, lifeless. It was therefore believed that the head was the source of life and energy. This does not solve all the issues in the text—but it makes a big difference in our reading!”

It is hard to read the Bible with fresh eyes; to read what it actually says, rather than what we think, or would like it to say. We are all subject to psychological ‘confirmation bias’, meaning “people will see what they want to see in a situation, even if it is not actually there.”

Paul comments on a number of passages that, surprisingly, do not say what many of us will have assumed they say, and then challenges us with probably the best-known and most-often misinterpreted verse in the Bible – John 3:16.

“Most people remember it as ‘God so loved the world…’ meaning ‘God loved the world so much…’ But the word translated ‘so’ most commonly means ‘in this way’; it primarily indicates the manner of God’s love, rather than its degree.”

Its Canonical Place – what does it mean in here?

The final essential ingredient for good interpretation, says Paul is reading the text “in the light of its place in the immediately surrounding texts, within the book of the Bible it occurs, and most broadly within the whole sweep of the story of Bible.”

“If you watch the TV programme Time Team, you will see the archaeologists on the ground exploring the details of a feature. But they only make full sense of it when they pull back, usually in an aerial shot, to see how this detail fits in with the bigger picture. That is what we are doing when we read canonically; we are standing back to see this text in the context of the bigger picture of a passage, a book or the whole of Scripture.”

Bringing it All Together

Of course, the Bible is not just any book; we have the Holy Spirit as our promised guide. However, this does not absolve us from the responsibility to use our God-given brains as well.

“We certainly should rely on the Spirit for guidance to direct our reading, excite our interest, and shape our will. But a rejection of thinking about hermeneutics
on the basis of the Spirit’s guidance sets the rational against the spiritual, as if we did not need to love God with our mind as well as our body, soul and strength.”

That interpretation is tricky is shown by the level-headed, intelligent, godly folks who can look at their Bibles and come out with exact opposite readings: for women in leadership, against women in leadership; for same-sex unions, against same-sex unions; for male headship, against male headship. Paul notes that “disagreeing about what Scripture means has been a feature of every era of Christian history,” and helpfully touches upon on some of the more contentious passages, with useful contextual clues. He expands upon some of these issues in other Grove Booklets, listed below.

Live in the Light of it

Interpretation is not simply an academic exercise for intellectuals and ‘professional’ Christians. Paul insists that “interpretation needs to be done by the whole people of God, not just by ‘experts.’ ” This is for every Christian for every day, applying what we find in God’s word to our daily lives.

“Having considered what kind of writing this is, what it meant in its context, having attended carefully to what it actually says (and not what we hope or assume it says), and noting where it comes in the story of the whole of Scripture, we then commit ourselves to the meaning that we find, and live in the light of it.”

Furnished with these four tools, we can safely read Isaiah 23 without looking for God paddling alongside every time we go swimming. ‘Cause that would be kinda weird.

Interpretation of the Bible is often greeted with suspicion— either as the way experts tell us what to think, or as a method for making texts mean what they do not appear to

mean. But we all interpret—and we all need to do it well. This stimulating study looks at four areas we must take seriously—exploring the kind (genre), context, content, and canonical place of the texts we read—and discovering the positive difference this can make for both ordinary and expert readers.

Ian Paul studied maths and worked in industry prior to ordination training and studying for a PhD in the interpretation of Revelation. After ten years in parish ministry and ten more in theological education, he now combines local church ministry with freelance academic work, including writing the influential blog www.psephizo.com. He is a member of the General Synod of the Church of England and the Archbishops’ Council.

The Grove Biblical Series aims to make the best in current thinking about the Bible and its application accessible to those teaching and preaching in the local church. New titles come out every March, June, September and December.

B 86 How to Interpret the Bible: Four Essential Questions

Other titles by Ian Paul:

B 28 How to Read the Book of Revelation

B 40 What’s the Bible All About? Understanding the Story of the Bible (with Philip Jenson)

B 59 Women and Authority: The Key Biblical Texts

B 82 Kingdom, Hope and the End of the World: The ‘Now’ and ‘Not Yet’ of Eschatology

E 136 The Ethics of the Book of Revelation

R 20 How to be Fruitful (with Mike Breen)