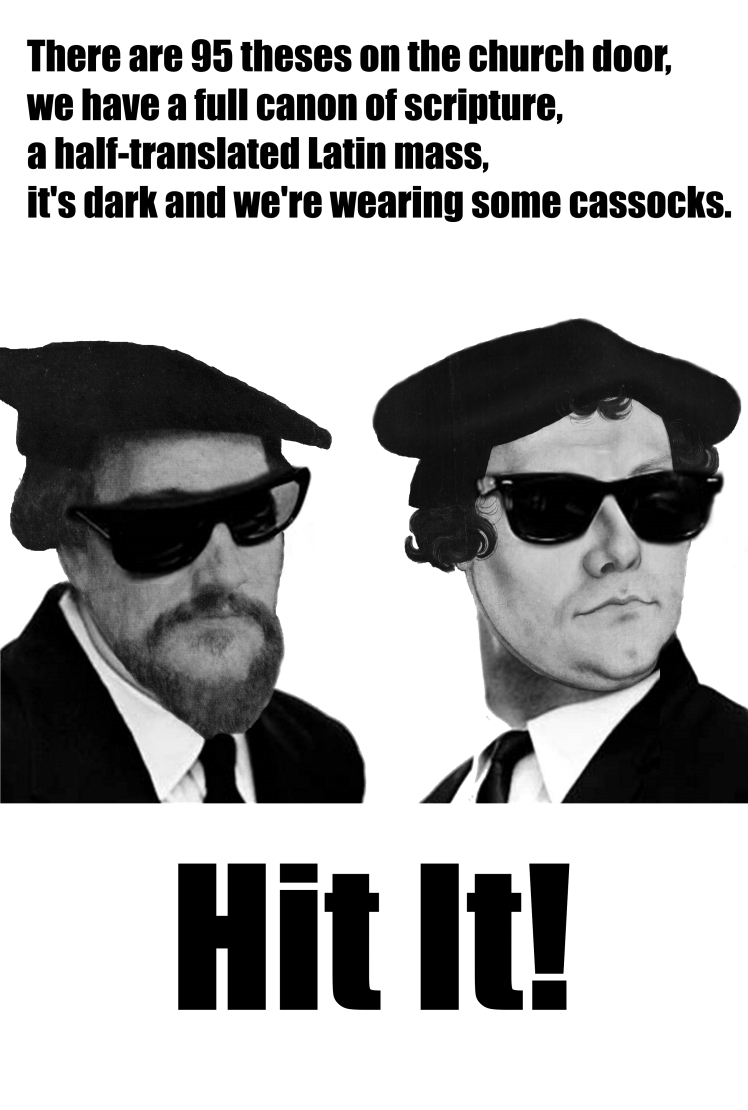 A Sketch for Reformation Day, October 31

It came as a flash of inspiration when I noticed that John Calvin and Martin Luther look remarkably like Jake and Elwood Blues, the (im)famous Blues Brothers. And so this tongue-in-cheek drama for Reformation celebrations was born.

It is in a light-hearted ‘Father Ted’ style depicting Pope Leo as a chat show host interviewing Luther and Calvin, who are ‘putting the band back together’.

There are three chairs centre stage. Leo sits in the middle one. Leo can have a clipboard for script.

Leo: Hello, and welcome to The One Church Show.
On tonight’s program we have some very special guests, about to take their band on a whistle-stop tour of Europe.
Opening at Wittenberg, they will play Geneva and Zurich before their final performance here at The Vatican City. (Ticket hotline is now open. One night only, smart casual, no robes.)

Put your hands together now to welcome Martin Luther and John Calvin.

Calvin: We’re on a mission from God.

Leo: (to Calvin with a slightly odd look) Yes, Yes, aren’t we all.
(to Luther) Take a seat and tell me all about yourselves.

Luther: Well first I’d like to say that we’re so glad to see so many of you lovely people here tonight.
And we would especially like to welcome all the representatives of the Vatican’s law enforcement community that have chosen to join us here in [fill in name of church] at this time. We certainly hope you all enjoy the show.
And remember, people, that no matter who you are and what you do to live, thrive and survive, there’re still some things that makes us all the same.
You. Me. Them. Everybody.
(pointing, ending with Leo)
I mean you, you, you.

So, just who are you exactly? Your face is familiar. Are you famous?

Leo: Well, it’s kind of you to recognise me. Autographs later.
I’m Leo the Tenth. Bishop of Rome, Vicar of Jesus Christ, Successor of the Prince of the Apostles, Supreme Pontiff of the Universal Church, Primate of Italy, Archbishop and Metropolitan of the Roman Province, Sovereign of the Vatican City State, Servant of the servants of God.
My friends just call me Leo.
(looking sideways at Calvin)
But, perhaps we’ll stick with ‘Your Holiness’ for now.

Luther: Ah, you’re the Pope. May I call you Papa?

Luther: So anyway, about the band …

Calvin: (still staring straight ahead) We’re on a mission from God.

Leo: (giving Calvin a weird look) Yes. Yes. Of course.
(to Luther) You were saying?

Luther: Well, it’s been 500 years, but we’re putting the band back together.

Luther: You could say that, yes.

Calvin: We’re on a mission from God.

Luther: Well, of course, it’s me and Johnny on vocals, and we’ve got some hot new moves to lay on you. Johnny has some amazing licks on his harmonica too, Haven’t you Johnny-baby?

Calvin: I’m on a mission from God.

Leo: (to Calvin) Mmm. Right.
So Luther, who else will be playing with you?

Luther: We’ve persuaded Zwingli to come out of retirement and work his old magic on lead guitar. And I’m really happy to say that we’ve got John Knox on drums, travelling all the way from Scotland.

Luther: Yes, he’s very keen. He walked five hundred miles, and said he would walk five hundred more, just to be the man who walked a thousand miles to see what’s on that door.

Calvin: He’s on a mission from God

Leo: (to Calvin) Really? I’d never have guessed.
Well, Luther, that sounds a great line-up. Will you and Calvin, or … does he prefer to be called Johnny-baby?

Calvin: We’re on a mission fro…

Leo: OK, OK. Calvin it is.
(to Luther) Will you and Calvin be performing your usual duets on the tour?

Luther: This year we’ve got five Solas as well. The ideas have been around for a long time, but we’ve formed them in to something really radical.

Leo: That sounds intriguing. Can you tell me more?

Luther: Well, we don’t want to give too much away before the big launch at Wittenberg, so you’ll have to wait until then.

Leo: Are you sure? Couldn’t you indulge me?

(Calvin and Luther both turn their heads sharply and give Leo a hard stare with a sharp intake of breath. Calvin returns to staring straight ahead.)

Luther: Hmmn, indulgences. Actually, I’d been meaning to have a word with you about that.

Leo: (interrupting) So ladies and gentlemen, that’s all we have time for here on The One Church Show.
Next week, sitting on the comfy chair, we’ll be featuring a hot new band from Spain called The Inquisition, but now, to play us out, please raise the roof for The Reformers!

Calvin: (standing) We’re on a mission from God. There are 95 theses on the church door, we have a full canon of scripture, a half-translated Latin mass, it’s dark and we’re wearing some cassocks.

(music: ‘Everybody needs somebody’)

Grateful thanks to Steve Dawson for the original idea and all the bad jokes.