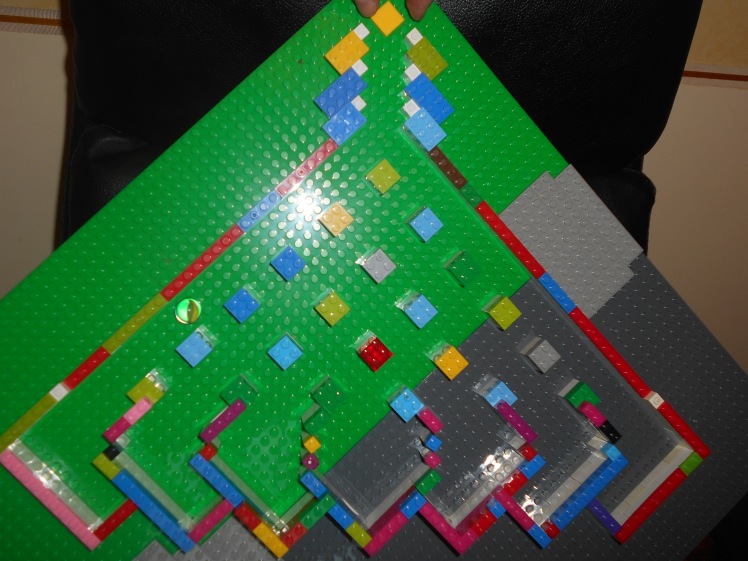 This simple activity is good for thinking about choices. It’s is fun to make, and is a great discussion starter.

Joseph’s brothers had choices about how they treated him. Eight of them wanted to murder him, but two brothers didn’t. How did they start from the same place and end up such different people?

We can make a Lego ‘decision machine’ to investigate how the decisions we make affect what happens later. It also illustrates how an early poor decision need not be disastrous.

Here is my decision machine. The marbles go in at the top (on the yellow square) and they wiggle their way down to the different holding pens at the bottom. You can see a marble on its way down.

When you build yours, remember that you have to build diagonally, and make sure that the gaps are big enough for your marbles. My outer wall is one block high down the sides, and two or three blocks high around the holding pens.

The decisions we make have consequences. Let’s say that I want to get to the 7th holding pen on the far-right. If my first decision is to go left, then I’m just not going to get there. The only option is to start again. Not all decisions are so irretrievable though. Let’s say I want to get to the third pen. It’s towards the left side, so deciding to go left at the first block would seem best, and so it is. But if I start by going right, all is not lost. Trace the route and see how I could get there, even if I start by going to the right.

In fact, I can get to the third pen even if I choose to go right at the second block as well. God is the God of second chances. And third chances. And fourth …

The Maths Behind The Fun

The decision machine is an example of a ‘quincunx’ or Galton board, a device which demonstrates the probabilities of reaching the different destinations, based on the number of routes to get there. Pascal’s triangle gives the number of possible routes for any size of triangle.

In reality, the Lego version sends far more marbles to the edge pens because of the bobbles, and can be biased because it has a tendency to tip one way or the other.

Click here for an interactive decision machine in action.

Ahhh! You can almost hear the sign of relief. “Jacob lived in the land where his father had stayed, the land of Canaan.“ Jacob’s roaming days are over. The family feud with his brother is settled. He has been given a new name by God and now finally, he is home. His loving family is all around. Peace and quiet at last. Pass the slippers and newspaper, please.

But that’s just the first verse of our reading today. The mood soon changes.

Family life  ‘At Home With The Jacobses’ was never going to be easy, not with twelve sons all competing for their father’s attention, and four wives doing the same. No wonder Jacob had legged it from Laban’s house – think of all the mothers-in law!

However, what we read about here is not your standard sibling rivalry. This is dysfunctional at a whole new level, and Jacob isn’t helping. It’s almost as if Jacob is encouraging it. Was it wise of him to be so obvious in his favouritism towards Joseph? And sending the tell-tale teenager out to spy on his older brothers? Is Jacob trying to make them  fall out? Of course, Jacob didn’t exactly have the best examples to learn family life from. Maybe that explains Jacob’s poor parenting skills.

Explains, perhaps, but does not excuse.

Earlier in this story we looked at Jacob’s name, and how he had chosen to live up the poor reputation he was given. It was probably not a great idea to give a child such a negative name (who would call their child ‘Cheat’ today?), but it was Jacob’s choice to build on that poor foundations. We do not all have brilliant starts, but we all have choices.

Our upbringing has a huge influence on our lives, that is certain. It provides the first and most important example of how to be a human. But while it is a template, a default, it is not rigid mould that we are destined to fill. Jacob grew up with murderous sibling rivalry, fuelled by parental favouritism. It seems he did not learn from the mistakes of his parents, and repeated them in his own family, but it does not have to be so.

Look towards the end of the passage. Two of the older brothers, Reuben and Judah, are breaking the mould. They are angry with Joseph, but they don’t want to kill him. They have had the same upbringing as their brothers, but they are reacting differently. They have heard the same insulting dreams, but their anger does not morph in to murder. Perhaps these two looked at the example of their father and grandfather and decided to do better.

It’s like we’re writing our life-book. We start by copying someone else’s as an example, but the example is not perfect. There’s plenty of good stuff in there, but there are also spelling mistakes and bad grammar and crossings-out. We don’t get a choice about the example we’re given, but we do have a choice about what we do with it.

We can choose to copy the poor examples and so make our own life-book full of all the same spelling mistakes and bad grammar and crossings-out, and then add our own blunders on top. Or we can choose to copy (what we hope is) the good stuff and to make a stab at correcting the less-than-good stuff. Of course, we’re never going to end up with a perfect book. We all make mistakes and that’s normal. But we do not have to stick with the hand we are dealt, to change metaphor mid-paragraph.

No-one gets a perfect start, but where we end up depends on our choices. And we all have choices.

Think back to the examples you have been given: in family, work, relationships. How far are they helpful? Which would you want to copy?

Jacob lived in the land where his father had stayed, the land of Canaan.

Joseph, a young man of seventeen, was tending the flocks with his brothers, the sons of Bilhah and the sons of Zilpah, his father’s wives, and he brought their father a bad report about them.

Now Israel loved Joseph more than any of his other sons, because he had been born to him in his old age; and he made an ornate robe for him. When his brothers saw that their father loved him more than any of them, they hated him and could not speak a kind word to him.

So he said to him, “Go and see if all is well with your brothers and with the flocks, and bring word back to me.” Then he sent him off from the Valley of Hebron.

When Joseph arrived at Shechem, a man found him wandering around in the fields and asked him, “What are you looking for?”

He replied, “I’m looking for my brothers. Can you tell me where they are grazing their flocks?”

“They have moved on from here,” the man answered. “I heard them say, ‘Let’s go to Dothan.’”

So Joseph went after his brothers and found them near Dothan. But they saw him in the distance, and before he reached them, they plotted to kill him.

“Here comes that dreamer!” they said to each other. “Come now, let’s kill him and throw him into one of these cisterns and say that a ferocious animal devoured him. Then we’ll see what comes of his dreams.”

So when Joseph came to his brothers, they stripped him of his robe—the ornate robe he was wearing— and they took him and threw him into the cistern. The cistern was empty; there was no water in it.

As they sat down to eat their meal, they looked up and saw a caravan of Ishmaelites coming from Gilead. Their camels were loaded with spices, balm and myrrh, and they were on their way to take them down to Egypt.

Judah said to his brothers, “What will we gain if we kill our brother and cover up his blood? Come, let’s sell him to the Ishmaelites and not lay our hands on him; after all, he is our brother, our own flesh and blood.” His brothers agreed.

So when the Midianite merchants came by, his brothers pulled Joseph up out of the cistern and sold him for twenty shekels of silver to the Ishmaelites, who took him to Egypt.