A Crown of Righteousness! This is not a rich golden crown, encrusted with precious jewels and given to us because we are so fabulous that we deserve it.The crown Paul was talking about was made of leaves. It was made for the winner at the ancient Olympic games or victor in a battle and was worth absolutely nothing in terms of money. It would last only a few days and then the dry leaves would crumble into dust.

Place two two chenille sticks together, staggered – one starting half way up the other. Start to twist them together, and when you have done a couple of twists, add a square of green tissue between the strands. Keep twisting and adding tissue paper ‘leaves’ until you are nearly at the end of the shorter strand.

Twist a new chenille stick onto the shorter piece, and fold over the very ends if they are scratchy. Keep adding leaves and more chenille sticks until you have about 18” / 50cm of wreath with 6” / 15cm spare bits at the ends.

Overlap the spare bits to make the circular wreath shape and twist the strands together as before, adding more leaves as you go. 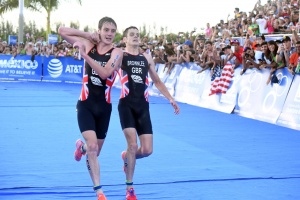 I recently watched the end of a triathlon featuring brothers Alistair and Jonny Brownlee. Jonny was all set to win the race and with it the world title when, just few hundred metres from the end, he staggered into the crowd. Alistair, just behind, took his arm and half-dragged his exhausted brother to the finish, pushing him over the line ahead of himself. What a way to end a race!

Paul is also ending a race as we read this final letter from him. These are his last recorded words. He is chained in a Roman dungeon, awaiting the verdict of his trial. He knows what it will be, and his death is a matter of days away. Paul can see the finish line. He can see the goal ahead.

When Paul says ‘the time for my departure is near’, I don’t think he is viewing his death so much as leaving, but more as setting out – loosing the ropes from the dock, finally making the journey after years of planning. His eye in on his destination. He has made his peace with this life and is ready for the next. It’s a good place to be.

To use a modern analogy, is as if Paul is in the departure lounge of a spaceport, with a one-way ticket to Mars … and his flight has just been called. So he is hurriedly sending final texts to all his loved ones, updating his facebook status one last time and closing down the internet connection for good. This is it. Time to go.

Yet in verse 18 Paul says ‘The Lord will rescue me’. Paul is on trial before Nero (the ‘lion’ of verse 17), who was blaming Christians for everything from curdled milk to the burning of Rome a few years earlier. Paul is never going to be acquitted by Nero, yet he says confidently, ‘The Lord will rescue me’. How? Will there be a miraculous visit from an angel, as happened at Philippi? Will Paul be bodily transported to somewhere else, as happened to Peter?

There will be no miraculous escape. No glorious liberation. Instead, a sword and a beheading as befits a Roman citizen. How is that a rescue?

It depends what you mean by rescue. Rescue from what? Rescue to what?

For Paul, it is rescue to God’s presence, and he is ready. This is not rescue from death, but rescue through death. Paul is ready to go. He can say, with Peter Pan, ‘To die will be an awfully big adventure.’

How ready am I for the ‘awfully big adventure‘?

For I am already being poured out like a drink offering, and the time for my departure is near. I have fought the good fight, I have finished the race, I have kept the faith. Now there is in store for me the crown of righteousness, which the Lord, the righteous Judge, will award to me on that day – and not only to me, but also to all who have longed for his appearing.

At my first defence, no one came to my support, but everyone deserted me. May it not be held against them. But the Lord stood at my side and gave me strength, so that through me the message might be fully proclaimed and all the Gentiles might hear it. And I was delivered from the lion’s mouth. The Lord will rescue me from every evil attack and will bring me safely to his heavenly kingdom. To him be glory for ever and ever. Amen.